This website was developed to provides easy access to the gbmSYGNAL network by allowing searching of somatically mutated genes, regulators, or genes in biclusters. In addition there is a veiw of the combinatorial network that also can be used to link through to regulators present in combinatorial reglatory interactions.

The SYGNAL pipeline constructs a TRN in three steps (Figure 2): 1) simultaneous dimensionality reduction and mechanistic inference of regulation by a TF of miRNA for a bicluster of genes and conditions (patients are considered conditions in the case of cancer); 2) filter biclusters by validating co-expression and ensuring disease relevance; and 3) causal inference that infers relationships linking somatic mutations to a TF or miRNA to the regulation of a bicluster. We applied the SYGNAL pipeline to multi-omics data from The Cancer Genome Atlas (TCGA) for GBM across 422 patients and 9 normal post-mortem controls to infer an integrated TF and miRNA regulatory network (Brennan et al., 2013). The TCGA multi-omics data were refined at each omic level to enhance the signal-to-noise ratio.

Figure 2. Regulatory influences from target gene databases (this study) and patient tumor data (from The Cancer Genome Atlas (TCGA)) are analyzed sequentially in three steps by a suite of interconnected algorithms in the SYGNAL pipeline. The gbmSYGNAL TRN was constructed by using the SYGNAL pipeline to analyze tumor biopsy data from 422 patients with different subtypes of GBM. The resulting TRN is a predictive map that implicates specific somatic mutations in causally modulating the expression of a TF(s) or miRNA(s) that in turn regulates genes (within a bicluster) that are putatively associated with a hallmark of cancer. A summary of the counts for each feature in the gbmSYGNAL TRN is shown on the left.

The integrated analysis of all these multi-omics data with the SYGNAL pipeline and subsequent filtering discovered 500 biclusters (out of 1,830 biclusters) of genes that were significantly co-expressed across different subsets of patient tumors (in the TCGA and at least one independent GBM cohort) and were disease-relevant (significantly associated with patient survival or a hallmark of cancer; Figure 3A). The SYGNAL pipeline also inferred causal influences for somatically mutated genes and pathways on the expression of TFs and miRNAs, which in turn were predicted to modulate the expression of co-regulated genes within one of the 500 biclusters (i.e., somatic mutation → TF or miRNA → bicluster; Figure 3B and C). 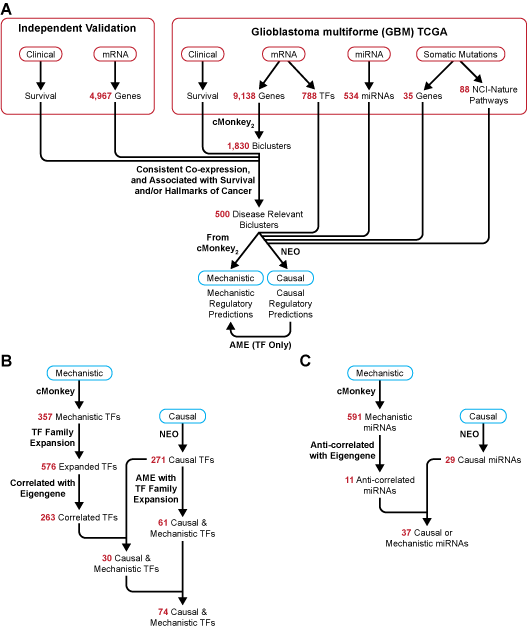 Using this approach, somatic mutations within 34 genes and 68 pathways were causally associated, through TFs and miRNAs, to the differential regulation of disease relevant genes (,b>Figure 2). Notably, 9 of the 34 mutated genes are well known driver mutations in GBM (Gonzalez-Perez et al., 2013): AHNAK2, EGFR, IDH1, MLL3, NF1, PIK3CA, PIK3R1, PTEN and RB1 (Figure 2C). The SYGNAL pipeline derived network identified additional GBM driver mutations in 25 genes and 68 pathways that putatively act via modulating the activity of TFs and miRNAs, which in turn regulate the expression of 5,193 disease relevant genes associated with patient survival and/or hallmarks of cancer. Thus, the SYGNAL pipeline provides the means to synthesize genotype, gene expression and clinical information into a TRN (the gbmSYGNAL network) with both mechanistic and causal underpinnings to explain how specific mutations act through TFs and miRNAs to generate disease-relevant gene expression signatures observed within patient data. 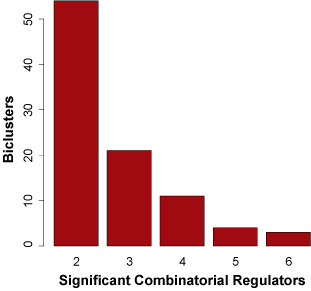 The SYGNAL pipeline and the gbmSYGNAL network were developed at the Institute for Systems Biology by Chris Plaisier in Nitin Baliga's lab. Feel free to contact us at: